Get a Quote
Articles Tagged with 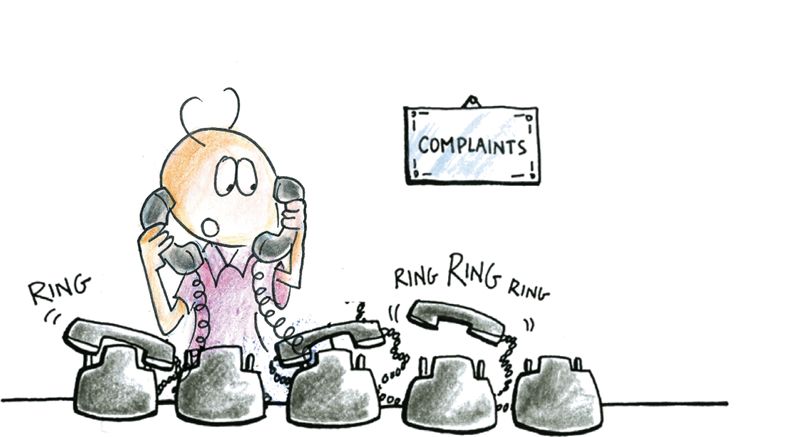 Do You Know About Your Moment of Truth?

The Moment of Truth is the short timeframe when a customer experiences the product or service that many people have often prepared over months. It is the moment when a small, often unintentional mishap has the huge potential to spoil the result of hard work by others in the organisation behind the scenes. … 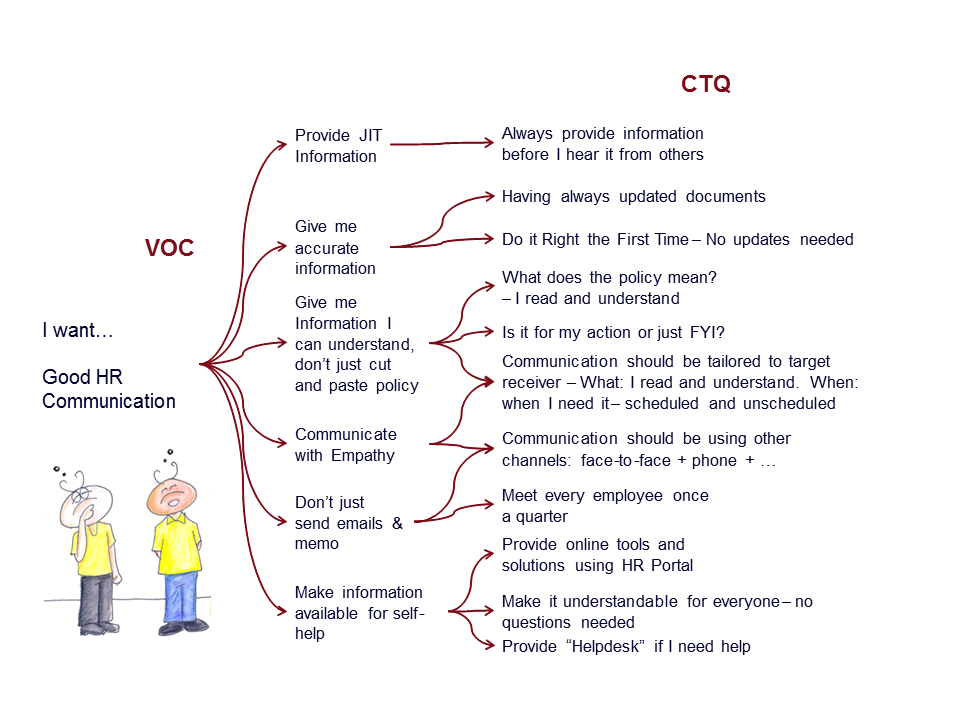 Given today’s need for HR professionals to be strategic business partners, to be a ‘Voice of Conscience’ to the CEO as well as champion for the employees. Those with background in proven management methodologies and tools have a great advantage. HR Professionals who can present their business case for HR strategies and interventions with a compelling return on investment, supported by rock-solid data, will be well respected and regarded. Understanding and using HR data analytics including basic statistics to convey messages goes a long way. Making proper use of HR data may help to identify drivers for staff satisfaction, staff turnover or staff engagement.… 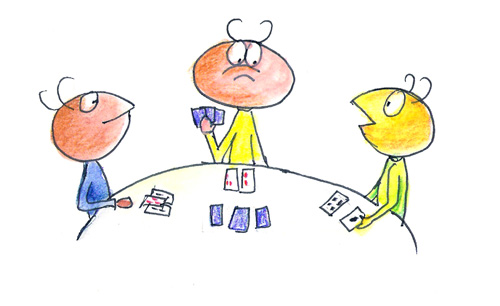 Banking – A Productivity Gold Mine

When I joined General Electric Capital fifteen years ago, I asked them why they would hire an engineer with no prior banking knowledge. The answer was quite a pleasant surprise: “We have enough people who understand banking. Unfortunately, we do not have those with a process mind-set.”

To assume that banks have changed since then, might be baseless. For me, banking is the real productivity gold mine. Here is a snapshot of some of the questionable activities that banks have been engaging in recently.…

Ting is a sophisticated traditional Chinese character (Figure 1) that exemplifies the most important activity related to customer service in an impressive way: Listening. The old Chinese already knew that when listening with your ears, you better treat the speaker as a king, focus wholeheartedly with 100% attention.

Only by doing so you learn about your customers’ requirements, the mentioned ones and – often more important – the unsaid.

It was early evening when I received one of these customer survey calls everyone experiences once in a while. The timing was not perfect however I decided to help this poor chap on the phone. He was just trying to do his job for his bank. Patiently did I listen to his questions trying to give him my honest rating on a scale from 1 to 10. Before we started, I had already decided that my average rating would be around 7. This does not make someone loosing face and still shows some room for improvement. Since the questions did not really touch anything that had to do with my banking experience but did rather circle around the brand value of his bank, I lost some interest. Nevertheless I installed some variation by going down to 5 and up to even 9 for some questions. 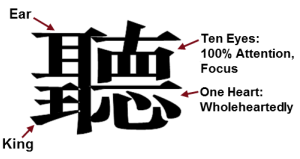 Only when he finally touched an area that had to do with my recent banking experience, I woke up, gave him a rather low rating and wanted to explain why. His answer was: ‘Sorry, I am not really from this bank. I am calling from a call centre and I am not able and needed to gather your verbatim feedback.’

Customer surveys are means of listening to the customer. Unfortunately, when you survey a customer he is often not in the mood to give his feedback. Most likely, he is disturbed in the middle of something more important – which is nearly everything. When you then engage a call agent – who gets paid by number of calls completed in a certain time frame – you have two people who are not interested in talking to each other. That call would be used to derive strategy, improvement actions or OD interventions. What do you think is the result of that? Where is the Ting in that?

Another time, I had a rather unpleasant experience with one of our banks and their incorrect statements. I sat down, took time to write a pretty detailed explanation of what happened. The bank contacted me and promised to look into the matter. Some days later they apologised and said that this was an IT issue. This would be fixed with the next release. Good.

Customer complaints related to real events are much better in quality and usually indeed useful for both, fixing the problem and improving the system. Research in the German financial sector has shown that these complaints commonly reveal only the tip of the iceberg. Behind each complaint you should expect 25 similar unpleasant events with customers who do not complain. They may just walk.

And, think about how much you pay for the surveys. Complaints come for free!

Learning from the Great

And, how does this relate to our customers?

Another best-selling question by our SVP was

Do you THINK this is what the customers want or did you actually ASK them?

Both questions needed to be answered with specifics, with facts. Commonplaces would not be accepted. Never before or after have I seen this kind of rigour in another company.

TING in Action at an SME in Jakarta

David, the MD of a medium-sized supplier company for the petrochemical industry in Jakarta, meets his direct reports every morning at 0800 for a very short update. He used to ask questions like ‘Everything ok? Anything new?’ until he found that something is missing in his company: the focus on the customer. Therefore, he decided to change this daily routine. He now starts the day with one question: ‘How is the voice of the customer?’ His team needs to mention not only issues raised by clients or observed by his staff. They also need to come with short-term and long-term solution ideas. Every day! Since they started this habit, they learned a lot more about their clients. In this company, the meaning of voice of the customer is in the bloodstream. They listen with 100% attention – and act. They know the meaning of “Ting”.

TING in Action at the Government

In the Singapore blood bank, nursing staff together with Red Cross continuously work on improving the level of customer service. They know that every donor who does not return means a lost blood bag that could be vital for a patient in one of the hospitals. Therefore, nurses and their colleagues do not rely on written customer surveys. They contact their donors in order to listen wholeheartedly to donors’ needs, to understand their concerns and to be able to serve them better. Although being a government agency, they display an exceptional level of dedication and customer focus that would do good to any private organisation.

Talking about the importance of the customer once in a while and running some surveys from time to time is not good enough to really serve them better. In order to achieve this you need to change the behaviour of your team members. It is necessary to install some habits.

Make it a habit, like David, to ask in your meetings with your team members ‘What is our customers’ voice? What have you done to serve our customers better?’ And, make it a habit to start the talk with your own story to highlight how you have improved the level of customer service.

If you cannot answer these questions positively every week, check whether you have spent your time wisely.

And, it would do us good to remember what the old Chinese taught us some thousand years ago: Listen with your ears wide open (and your mouth shut), by treating the speaker as a king, whilst focusing wholeheartedly and paying full attention. Listen with Ting.