In some situations, Lean Six Sigma practitioners find a Y that is discrete and Xs that are continuous. How can we apply regression in these cases? Black Belt training indicated that the correct technique is something called b inary logistic regression or binary regression. But this tool is often not well understood. 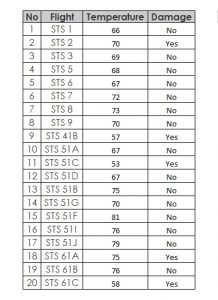 The data in Table 1 comes from the Presidential Commission on the Space Shuttle Challenger Accident (1986). The data consists of the number of the flight, the air temperature in Fahrenheit at the time of the launch and whether or not there was damage to the booster rocket field joints. Using binary logistic regression and given a particular temperature at launch time, this data can help to determine the probability of damage to the booster rocket field joints.

There are five steps to apply logistics regression.

This function is the so-called “logit” function where this regression has its name from. The procedure for modeling a logistic model is determining the actual percentages for an event as a function of the X and finding the best constant and coefficients fitting the different percentages.

This is exactly the equation that comes out of statistical software’s output for logistics regression:

There are two major checks that test the validity of this model:

Reversing the Logit equation helps to obtain an answer to the question, given a particular setting of X, what is the probability of failure? Reversing this, the result is:

On the day of the Challenger incident, the temperature was 31 degree Fahrenheit. Hence, the probability of damage to the booster rocket field joints on that day is:

Hence, damage was almost a certainty.

The event probability for all the possible temperature settings is the result of applying the binary regression model. Using this event probability, we produce the scatter plot (decreasing logistic plot) in Figure 3. 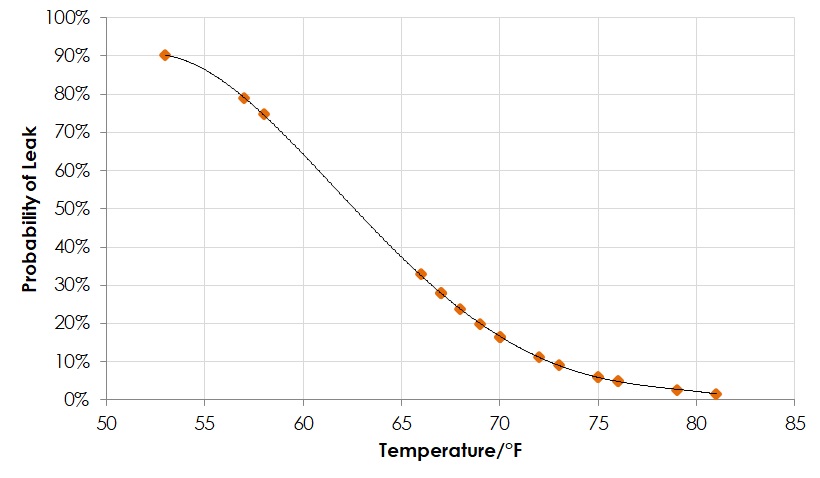 Using this scatter plot, it is quite easy to do some prediction. For example, if the outside temperature is about 55 degrees F, the probability of getting a damage – or better a leak in the booster rocket – is more than 85%.