Three methods for dissolving a powder in water show a different time (in minutes) it takes until the powder dissolves fully. The results are summarised in Figure 1.

There is an assumption that the population means of the three methods Method 1, Method 2 and Method 3 are not all equal (i.e., at least one method is different from the others). How can we test this? 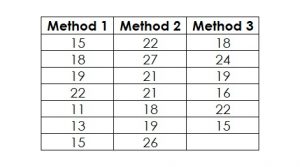 Figure 1: Data for Dissolving a Powder (in Minutes)

To perform this ANOVA, the following steps must be taken:

For any statistical application, it is essential to combine it with a graphical representation of the data. Several tools are available for this purpose. They include the popular stratified histogram, dotplot or boxplot.

The boxplot in Figure 2 shows that the dissolution time for Method 1 seems lowest and for Method 2 seems highest. However, there is a certain degree of overlap between the data sets. Therefore, based on this plot, it is risky to draw a conclusion that there is a significant (i.e. statistically proven) difference between any of these methods. A statistical test can help to calculate the risk for this decision. 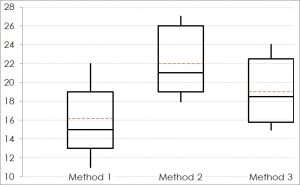 2. Formulate the Hypothesis for ANOVA

with all μ being the population means of the three methods to dissolve the powder.

If there is a need for comparing more than two means, the popular test for this situation is the ANOVA.

Finally, the prerequisites for the ANOVA, the analysis of variances, to work properly are:

Figure 3: Descriptive Statistics for Dissolving a Powder (in Minutes)

Secondly, as an alternative to perform a test for equal variances, it is appropriate to check whether the confidence intervals for sigma (95% CI Sigma) overlap. If there is a large overlap, the assumption for no significant difference between the variances is valid.

This means, both prerequisites for ANOVA are met. 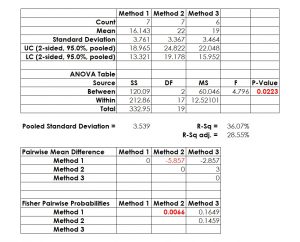 Using the ANOVA, the analysis of variances, statistics software SigmaXL generates the output in Figure 4.

With this, ANOVA statistics means that there is at least one significant difference.

Finally, the statistics informs that this X (Methods) covers only 36% of the total variation in the methods. There might be other Xs explaining part of the rest variation of 64%.