Three teams compete in our CHL business simulation, CHL Red, CHL Green and CHL Blue. After completing Day One, it looks like the teams show a very different performance (Figure 1). Although the means look very similar, the variation is strikingly different. This is surprising, since all teams start with exactly the same prerequisites. To test this assumption of different variability among the teams, the Test for Equal Variances is deployed. 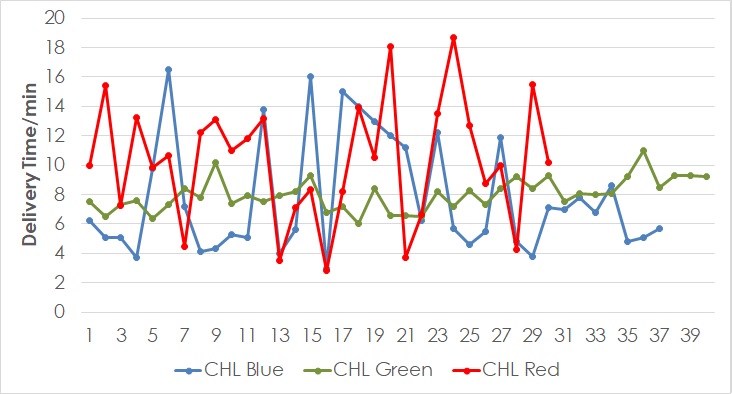 Finding a significant difference in variances (square of standard deviation), in the variation of different data sets is important. These data sets could stem from different teams performing the same job. If they show a different variation, it usually means, that different procedures are used to perform the same job. Looking into this may offer opportunities for improvement bu learning from the best. However, this only makes sense if this difference is proven, i.e. statistically significant.

To perform the Test for Equal Variances, we take the following steps: 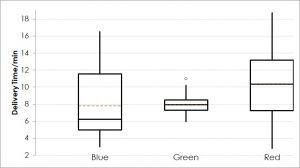 For any statistical application, it is essential to combine it with a graphical representation of the data. Several tools are available for this purpose. They include the popular stratified histogram, dotplot or boxplot. The Time Series Plot at Figure 1 does not clearly show the variability of the three teams.

The boxplot in Figure 2 shows much better an obvious difference in the variation between the three groups. A statistical test can help to calculate the risk for this decision.

2. Formulate the Hypothesis for Test For Equal Variances

with all σ being the population standard deviation of the three different teams.

If there is a need for comparing variances, there are at least three popular tests available:

Since tests that are based on a certain distribution are usually sharper, we need to check whether we have normal data. Figure three reveals, that CHL Blue does not show normality following the p-value of the Anderson-Darling Normality Test. Therefore, we need to run a Test for Equal Variances following Levene’s test.

Finally, there are no other prerequisites for running a Levene’s test. 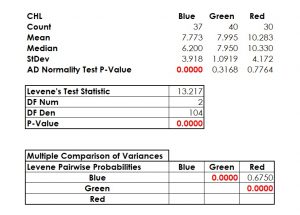 Running the Test For Equal Variances, using the statistics software SigmaXL generates the output in Figure 4.

With this, the Levene’s statistics means that there is at least one significant difference.

Finally, the statistics informs that CHL Green seems to have a significantly better way to run the simulation with much less variation, i.e. StDev of 1.09min compared to 3.92 and 4.17, respectively. After further looking into the procedure, we recognise that CHL Green organises packages in First-in-First-out (FIFO) order, whereas CHL Blue and CHL Red do not ensure FIFO.