Every blood donor of a large blood bank has to go through five process steps. These steps are Registration, Screening, HB Test, Donation and Refreshment. At the end of the process, that often takes around an hour, feedback forms are available for the donors. In one week, 210 donors have returned these forms with their satisfaction score for each process step.

This satisfaction score is measured using a six-point scale. The desired rating is either 5 (satisfied) or 6 (very satisfied).
The results are summarised in Figure 1.

From the results obtained, there is an obvious majority of “Not 5 or 6” ratings for Step 5. The question is, is there a significant difference to the other steps’ satisfaction score or are we observing just random variation. How can we test this?

To perform the Chi-Squared test, the following steps are necessary:

For any statistical application, it is essential to combine it with a graphical representation of the data. The selection of tools for this purpose is limited. They include pie chart, column chart and bar chart.

The column chart in Figure 2 reveals, that the customer satisfaction for Step 5 seems drastically lower (more “Not 5 or 6” ratings) compared to the other steps. Although, there does not seem to be any doubt about a worse rating for Step 5, it is a good practice to confirm the finding with a statistical test. Additionally, a statistical test can help to calculate the risk for this decision.

2. Formulate the Hypothesis for ANOVA

If there is a need for comparing two or more proportions, the popular test for this situation is the Chi-Squared test.

Finally, there is only one prerequisite for the Chi-Squared test to work properly: All expected values need to be at least 5. After the test, we will know whether this assumption holds true. 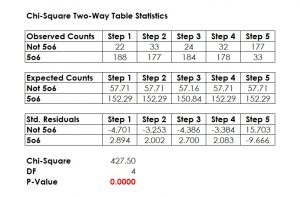 With this, the Chi-Squared test statistics means that there is at least one significant difference.

In order to interpret the Chi-Squared test results, three steps are necessary:

With this result, it is quite obvious, that interventions are needed to increase the customer satisfaction with Step 5.