Coaching is about believing in someone and then taking action to help that person to be his or her very best.

Some months ago, the managing director of an MNC approached me to develop a team of four operations managers with some people and management skills. Three of them were promoted recently but have not had any formal leadership training. This is not unusual as we see this happen over and over again. He also shared that he would like me to conduct a one-on-one coaching for one of his managers. He wanted me to develop her leadership skills and especially her openness to change.However, the MD was afraid that this manager, let’s call her JJ, was not receptive to such intervention. We discussed and developed the plan to start with group coaching for his team of managers. This way, the one-on-one coaching for JJ could be “sold” as a logical next step after the group coaching experience. 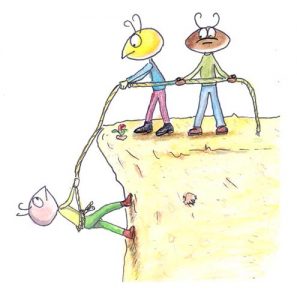 Group Coaching – Creating a Team to the Benefit of the Individual

I adopted a structured approach, with predetermined content, a fix number of 3 hour sessions on a monthly basis. We started by agreeing on basic ground rules such as punctuality, confidentiality and commitment. During each session, I would cover a certain topic such as communication, feedback techniques, problem solving methodology or coaching for performance to equip these managers with practical skills and some tips out of my personal backpack. The session typically started by inviting each individual to share their own experience and, of course, issues encountered under the respective topic. Since the team was very small, it was easy to ensure everyone’s participation in the discussion and sharing. Our session did not end without agreeing on a commitment related to the topic and some preparation for the next meeting.

The first meeting was key for the success since I needed to get to know each one of them. And, it was carefully designed in a rather teaching than coaching manner since the managers needed to get comfortable with the process and with me, the coach. Being comfortable with each other does in no way imply trust. The group took a while to “warm up” to me. Only by the fourth meeting, I could see some results. Especially their commitment for trying out new behaviours at work had grown over time. Slowly, it became easier to discuss some rather personal topics. I recognised that is was of great importance to deliberate such topics in the group because they slowly built trust not only to me but even with each other.

JJ was holding back in the first 2 sessions. Only during the third session, she started to participate in the debate and even offered her own encounters on tackling some issues raised by her colleagues. By then, I could also sense that the other managers became more relaxed with her. I saw a growing trust and camaraderie among them. A matured leadership team who was able to use the collective wisdom of the group started to emerge.

At the same time, I recognised that each of the four was progressing at a different speed. I felt that I needed to give more space for some of them to speak, whereas the others were ready to move on. And, there was a time constraint. I did not want to jeopardise focus and fluidity of the session.
I discussed with the group and agreed that the remaining two meetings were to be done on a one-on-one basis. By then, all of them were very open to the idea and had no reservations whatsoever. The recently completed 360-degree leadership assessment came in as a great help for discussion. After the warm-up phase through the group coaching, it was very easy to work even with JJ on a one-on-one basis to come up with a personal development plan. We certainly had the coach-able moment.

JJ moved me with her parting words:

To be very honest, Amy, at the beginning I tried to avoid this coaching because I was not comfortable at all to go through this. And, I did not expect anything positive for myself. Now, I have to admit that this coaching did not only help me in my job, it improved my relationship with the other managers – we have a very good communication now, we have trust. Even our boss seems to react to what we shared with him about our learnings. Thank you very much.

Benefits of group coaching for the organisation seem to be:

Amy is currently Director at the Centre of Organisational Effectiveness (COE Pte Ltd). She has more than 20 years of experience in human resource management and organisational development in various industries.